Skip to content
FLUITEK ORSENIGO VALVES started out ball valves manufacturing for the Oil and Gas industry in 1993 with the Orsenigo brand. Friulco Spa started its own production of cast steel valves for the energy and petrochemical industry in 1990. Their paths cross in 2012 with the acquisition of Friulco by FLUITEK ORSENIGO VALVES. This combined wealth of experience, know how and resources is now integrated in the new reality of FLUITEK ORSENIGO VALVES, with manufacturing facilities and headquarters in the North of Italy. In 2011, new ownership and management take on the challenge of building a centre of excellence in the engineered valve industry, putting customer first, guaranteeing to deliver cost and time effective solution to EPCs and End Users in the Oil and Gas and Power industries worldwide. The financial and industrial resources of two large industrial groups are the backbone of this project in the specially engineered valve industry. Sices 1958 Spa and SBI Spa (which owns 60% of the Mecaer Aviation Group Spa, MAG) are the main shareholders of FLUITEK ORSENIGO VALVES Spa. The Sices Group and Sices 1958 SpA operate in the international markets, having acquired a reputation of reliability in the design, supply, erection and maintenance of pressure vessels, heat exchangers, skid mounted plants, boilers and complete plants for the Oil & Gas, Chemical & Petrochemical, Energy & Power, Environmental & Recovery and Nuclear sectors. The Group has a turnover of 200M€uro employing about 1000 resources in different workshops and offices located in Italy, Poland, Libya, Greece and Egypt. MAG – Mecaer Aviation Group – is a leading international provider of solutions for Aircraft Landing systems, Aircraft Flight Control systems, Aircraft Modifications and Completions and MRO & services in the Helicopter, Business Aviation and General Aviation markets. The Group has three operating divisions, Actuation & Landing Systems, MRO & Services, Modifications and Completions, with many approvals and qualifications from regulatory agencies, military organizations, industry and customers. MAG has a global presence in the aviation market, reaching about 110M Euros in revenues, some 500 in people, with five operating facilities in Italy, Canada and the USA. 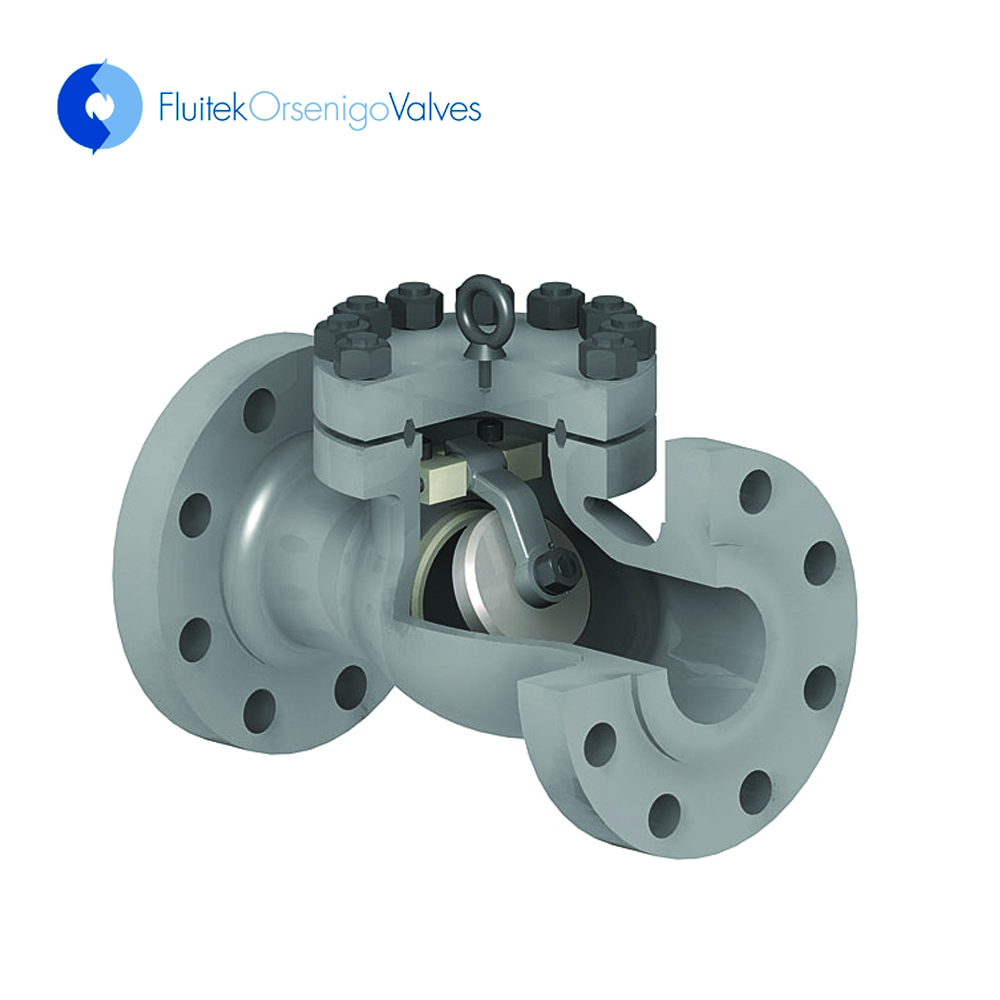 FLUITEK ORSENIGO VALVES has a very long experience in supplying this type of non return valve. It’s the most used one by the industry, normally coupled with on-off bolted bonnet gate valves and globe valves. Most used standard of reference are API 6D, regular opening, API 594, BS 1868. EN and ISO standard can also be referred to. Constructions with internal hinge pin are available, together with the more traditional construction with hinge pin inserted from the side. The latter allows application of optional requests, such as position indicator (with or without limit switches), locking systems in the open position (to exclude the unidirectional non return function), anti-slam external counter weights. A rotary anti-slam system applied to the external part of the hinge pin is also available (industry calls it “dash pot system”). Materials available include carbon steel, low temperature carbon steel, low alloy steel, austenitic stainless steels, austenitic-ferritic duplex stainless steel, nickel alloys. ANSI classes normally available are 150#, 300# and 600#. 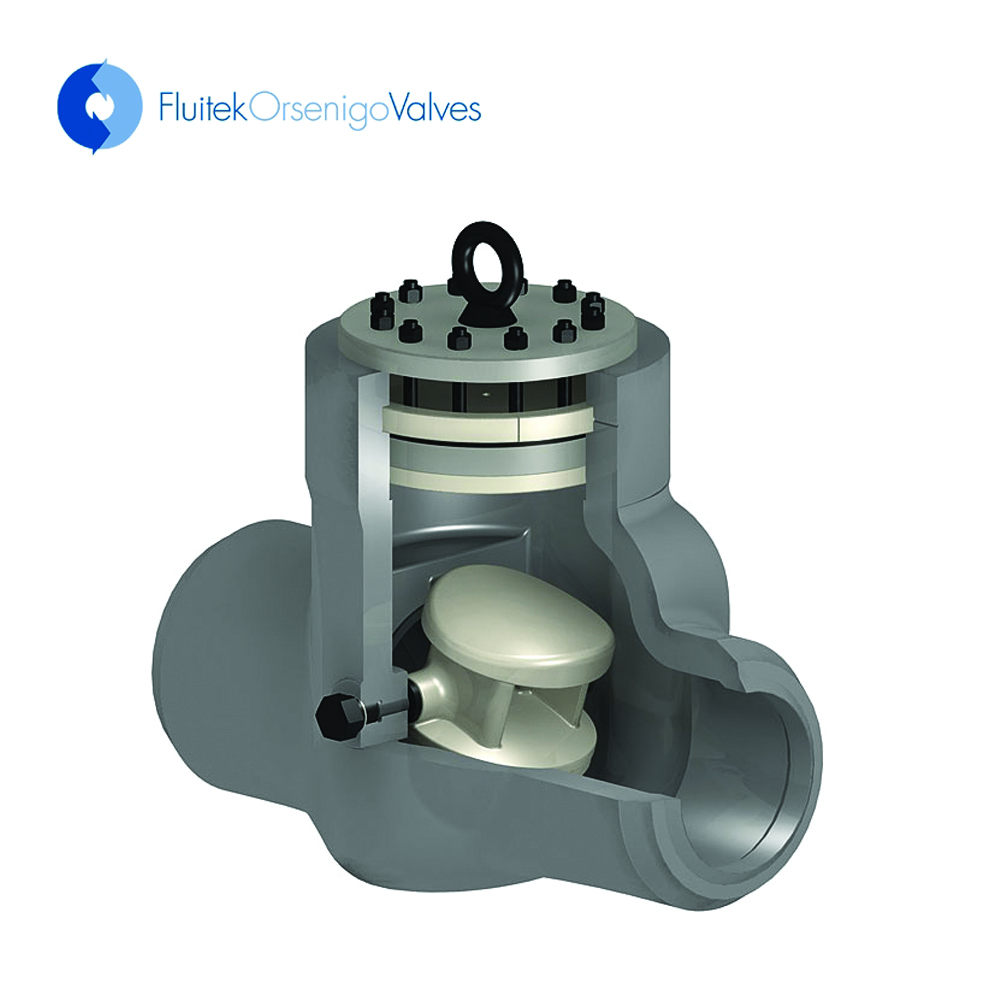 This type of valve (also called “equilibrated disc non return valve”) is coupled with on-off valves in high pressure lines to protect the system from the fluid reversing flow, when regular flow is stopped. The characteristic of this valve is “non slamming”. The disc, with its shape, is maintained in the open position by the fluid flow and its return to closed position does not cause a sudden violent hit against the seat. Design can be to ASME B16.34 but, also, to EN 12516. Cast body construction and forged body construction are both available. Materials range from carbon steel to low alloy steel (including the widely used modified 9% Cr alloys) to austenitic stainless steels, to nickel alloys. Pressure classes (per ANSI standard) are normally ranging from 600# to 900#, 1500# and 2500#. Size range depends on pressure class requirements, FLUITEK ORSENIGO VALVES having no limits in relation to market requirements. 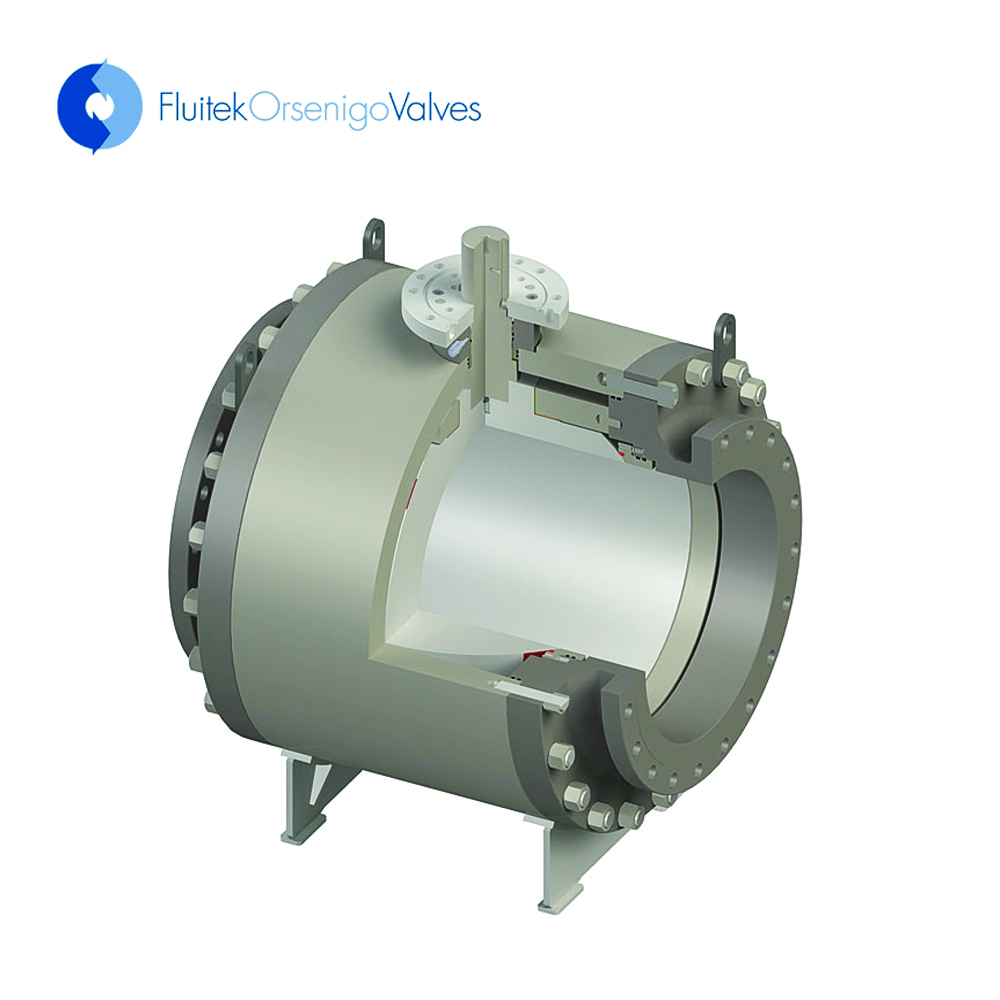 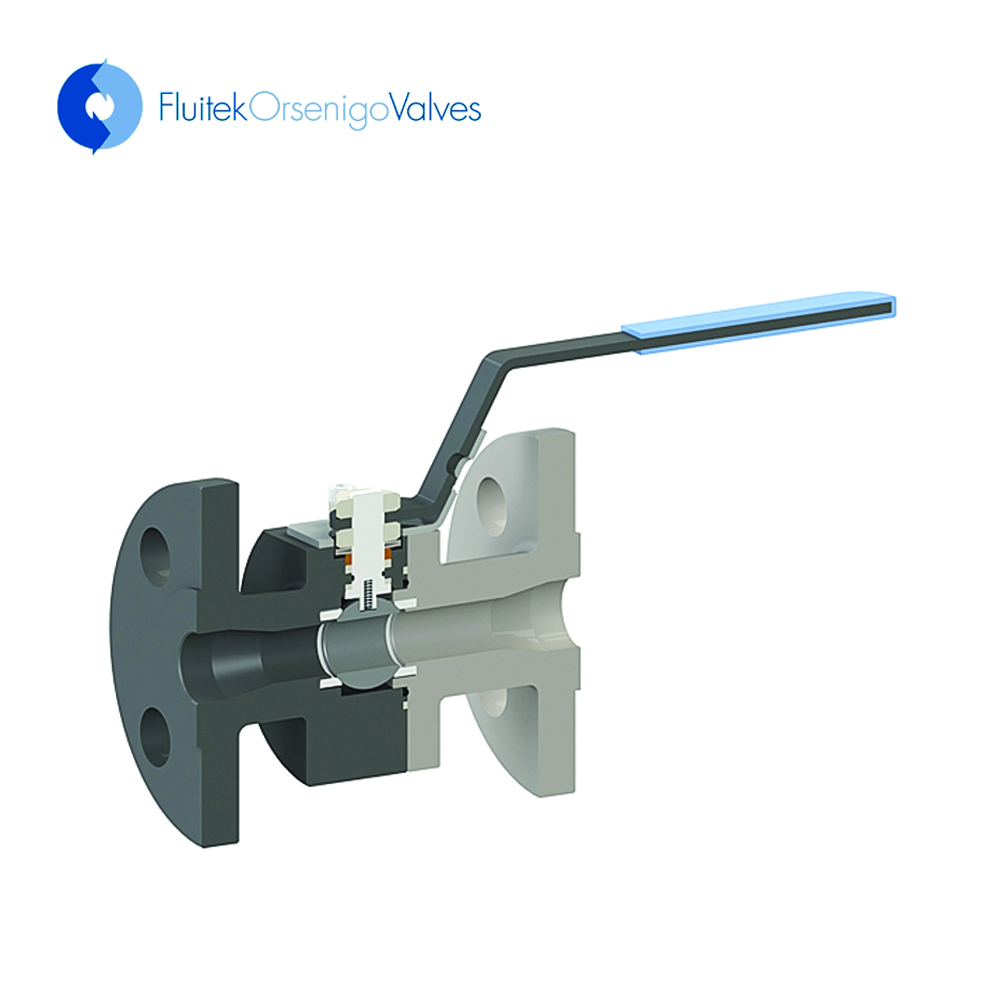 Floating Ball Valves typical application is for smaller sizes (up to 6 inches) and lower pressure classes. They are characterized by simple design, easy maintenance, low cost and quick delivery. Body construction can be two or three pieces, bolted or screwed body, made by forging, forged or rolled bar. Wide range of materials: carbon steels, austenitic or martensitic SS, duplex-superduplex SS, nickel-based alloys, titanium, aluminium-bronze and other exotic materials. Valve main technical features include automatically self relieving body cavity (due to floating ball) and anti blow-out stem. Main reference codes: – Standard design in accordance with API 6D and ISO 17292/BS 5351. – Antistatic design as per API 6D and ISO 17292. – Valve ends can be flanged (RF, FF, MF or FF, RTJ) according to ASME B16.5, Socket Welding, Butt-Welding, Female Threaded etc – Fire Safe according to BS6755 / API 6FA / API 607, since each sealing point is provided by a secondary fire-safe seal in graphite. Valve soft seats also are provided with secondary metal-to-metal seal in case of fire. 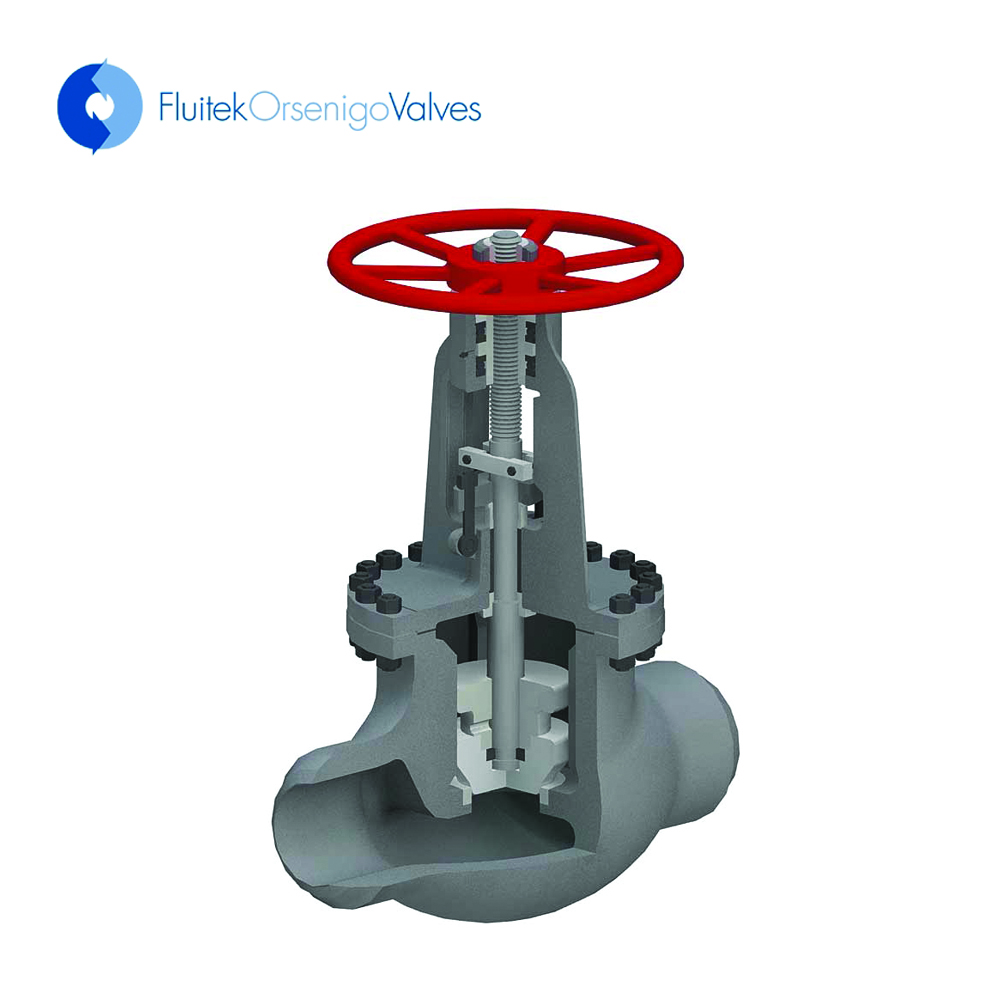 FLUITEK ORSENIGO VALVES has a very extended experience in globe valves manufacturing. In this kind of valve, the disc is moving in a perpendicular direction away from the seats. This implies the disc-to-seat ring contact to be at right angle, which permits the force of closing to tightly seat the disc, reducing the seat leakages. Normally, the globe valves are arranged so that the disc closes against the direction of fluid flow. The stem and the disc are not strictly fixed together, but the disc can swivel in order to guarantee the complete contact between the disc and seats surfaces. The disc can be plug type, needle type or parabolic type. FLUITEK ORSENIGO VALVES globe valves are on/off valves, but sometimes they are utilized in throttling service. In this case the parabolic disc shape is preferable, since the ratio between the stem position and the fluid flow is constant. Cast body construction is normally used. Ends configuration is either with flanged ends or with butt weld ends. Materials range from carbon steel to low alloy steel, to austenitic stainless steel, to nickel alloys. Materials are either to ASTM/ASME standards or to EN standards, either harmonized or calculated to design conditions. Pressure classes (per ANSI standard) are normally ranging from 150# to 300# to 600#. Size range depends on pressure class requirements, FLUITEK ORSENIGO VALVES having no limits in relation to market requirements. 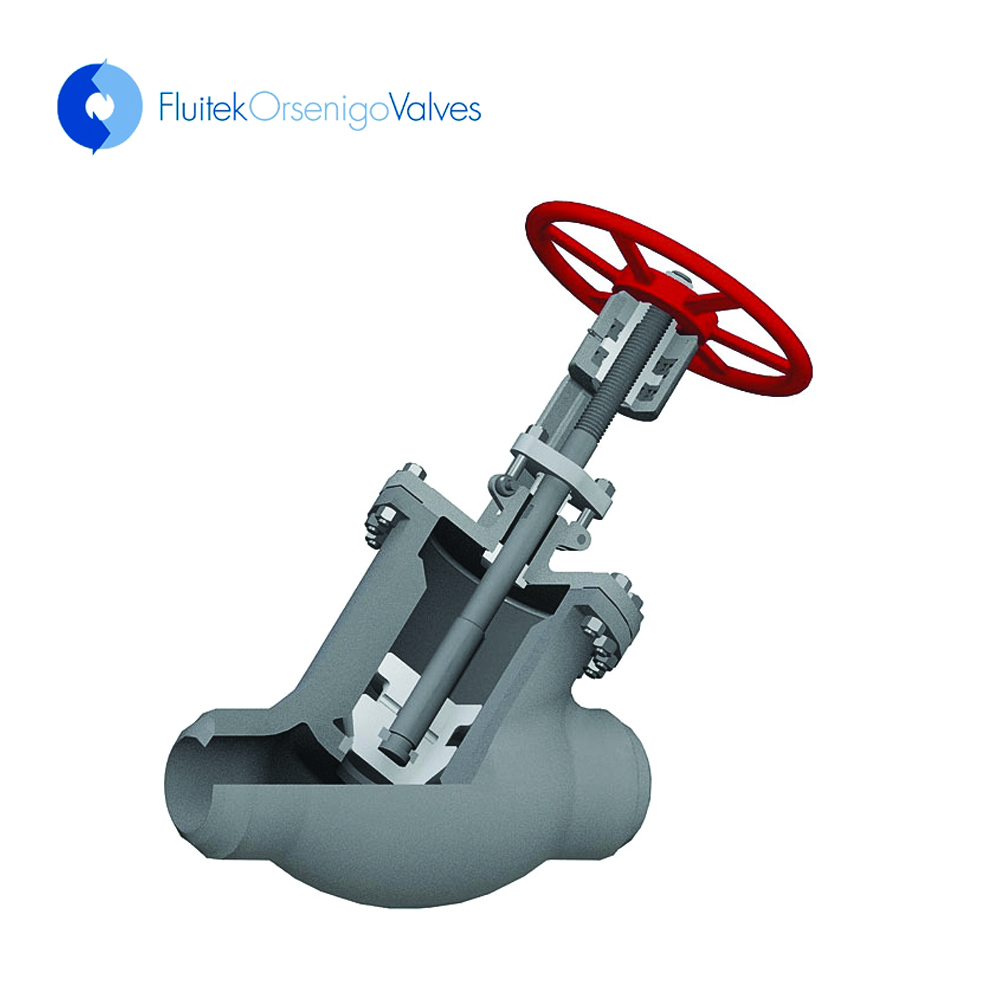 In addition to the line of globe valves bolted bonnet, FLUITEK ORSENIGO VALVES has added a line of same type of valve but with an inclined stem configuration, called Y-pattern type, as an alternative to the straight pattern, also called T-pattern. In principle, the Y-pattern configuration presents lower pressure drops at equal flow rate. The disc is normally either plug type or parabolic shaped. Cast body construction is normally used. Ends configuration is either with flanged ends or with butt weld ends. Materials range from carbon steel to low alloy steel, to austenitic stainless steel, to nickel alloys. Materials are either to ASTM/ASME standards or to EN standards, either harmonized or calculated to design conditions. Pressure classes (per ANSI standard) are normally ranging from 150# to 300# to 600#. Size range depends on pressure class requirements, normally not exceeding 12”. FLUITEK ORSENIGO VALVES has anyhow no limits in relation to market requirements. This type of valve includes in itself the features of a through conduit service and of a standard gate valve with a parallel seating surfaces. The through conduit service implies the continuity of fluid flow conduit, excluding any dirt accumulation in the body cavity. The gate is in two halves (the so called “gate” and “segment”) with angled sliding surfaces, kept together by springs or by a lever system for larger dimensions. Construction is available with single expanding or double expanding system. In the first case, the two halves of the gate are pushed against the seats in the valve closed position by having an internal stop acting on one of the two halves. In the second case the same expansion is also obtained in the valve open position. During the gate travel from open to close, or close to open, the gate springs or the lever system prevent the gate from being in contact with the seats by “contracting” the two gate halves together. Usual construction is bolted bonnet. FLUITEK ORSENIGO VALVES can supply these valves in a variety of materials: carbon steel, low temperature carbon steel, austenitic stainless steel, duplex and super duplex stainless steel and nickel alloys. Seating surfaces (seats, gate, sliding surfaces of the two gate halves) are provided with tungsten carbide coating, particularly for high pressure services. Pressure classes range from ANSI 300# to 600#, 900#, 1500# and 2500#.